Tennis great Serena Williams wore a sleek black catsuit to play in the French Open in May. It made her look like a superhero, but it also protected her against blood clots that had plagued her since she gave birth to her daughter. French Tennis …

Not sure what to be this Halloween? Instead of joining a group of pals as yet another Snapchat filter, why not stand out with a costume that’s part Ancient Egyptian, part badass babe? Cleopatra is the ultimate Halloween look, and with a little patience, some …

The “Star Wars” movies transport audiences to a galaxy far, far away, but thanks to the Detroit Institute of Arts, people don’t need to travel too far at all to get a closer look at the iconic costumes and creatures that gave the movies their signature look.

There’s still time to see “Star Wars and the Power of Costume,” which runs through Sept. 30 at the DIA. The exhibition features more than 60 original costumes from the first seven films in the “Star Wars” series, along with dozens of sketches and costume pieces that show how costumes evolved from the artists’ imaginations and George Lucas’ vision. See Yoda, BB-8, an Ewok, C-3PO, Chewbacca and other creatures from the film’s universe as well.

Organized by the Smithsonian Institution Traveling Exhibition Service, in partnership with the Lucas Museum of Narrative Art and in consultation with Lucasfilm Ltd., this display is a celebration “of creativity, imagination and artistry,” said Myriam Springuel, director of SITES.

“The wealth of materials and stunning costumes … provided the perfect (basis) for an exhibition,” Springuel said.

Although “Star Wars” is set in an imaginary galaxy, the costumes borrow elements from international fashion and history, one of the topics that the exhibition explores. For instance, DIA Interpretive Specialist Melanie Parker said that Darth Vader’s helmet was inspired by Samurai helmets.

“Visitors will discover surprising and unexpected stories that will lead to a (new) look at the costumes,” she said.

“We wanted to create an exhibit that brought new audiences to the DIA,” said DIA Director Salvador Salort-Pons.

The exhibition is particularly fitting for the DIA because the museum has been home to the Detroit Film Theatre art movie series since January 1974. The theater’s history is even longer than that. Elliot Wilhelm, the DIA’s curator of film programs and an exhibition curator, said the DIA is one of the oldest museum venues to show film — the DIA’s auditorium was built in 1921, and it showed films “in their infancy.”

Costumes are one of the ways filmmakers introduce and define their characters.

“The costumes give us an immediate impression of the character, even if those are turned on their heads later because you can’t always tell a book by its cover,” Wilhelm said.

Film screenings and other special programs have been organized by the DIA in conjunction with the exhibition.

Of course, this is a must-see for the legions of “Star Wars” film fans, but it’s also fascinating for other movie buffs, as well as followers of fashion.

She said high-end Japanese silk was used for the Jedi robe because of the way silk looks and moves on film. It might not be evident on the screen, but it can be appreciated in person.

“You see details that you don’t see in the films,” Springuel said.

Vintage wool from the World War II era was used for Obi-Wan Kenobi’s Jedi robes in “Episode I: The Phantom Menace,” but when the cloak was doused in water during filming, the cloak shrunk considerably, meaning that the costumers needed to acquire a great deal of this special fabric and make multiple cloaks, because they were ruined with each take. That’s one of the many insights visitors will get into the costumes.

Wilhelm said the DIA wanted to make sure that visitors could get a good look at the costumes, so it opted not to put them behind glass.

“We thought it would be more astounding to be able to get up close,” he said. “Some of these things are made for selfies.”

The DIA’s unique exhibition design includes interactive elements and a portrayal of the villainous Darth Vader in a way that Wilhelm said he hopes will be frightening enough to “scare children.”

“The most exciting aspect of the exhibition, to me, is you see … the creative process,” Wilhelm said.

Springuel said this is the sixth and final stop on the exhibition’s tour, which started in January 2015.

“This exhibition is sure to inspire more than a few new filmmakers and artists, and more importantly, inspire creativity in all of us,” Springuel said.

In our long-running series “How I’m Making It,” we talk to people making a living in the fashion and beauty industries about how they broke in and found success. Of the four decades “Saturday Night Live” has been on the air, Tom Broecker has been …

Every year on Halloween, countless Muggles dress in simple black cloaks and pretend for one night that they actually got their Hogwarts letters. Those flowing capes are iconic, but in the next wizarding movie, Harry, Ron, and Hermione’s go-to garbs will look totally different. In …

Last week, the internet reached the undisputed conclusion that Doja Cat’s “Mooo,” a song about being a cow, was the song of summer.

But what inspired the 22-year-old to write a song about being a cow? Well, in an interview with INSIDER, the singer said the secret sauce was all in her outfit.

“What mostly inspired the song — to be honest — the whole song is based off of the outfit that I was wearing. I thought it was such a ridiculous outfit, with the cowhide and everything,” she explained.

Although her outfit inspired the song, it actually became problematic in the songwriting process, she said.

“Because the sleeves were getting in the way of me trying to hit the keys and it’s so distracting, I couldn’t not write about cows,” she said.

Doja Cat, born Amala Zandile Dlamini, explained that she typically needs to be in some sort of costume to get her songwriting going.

“For some reason, I can’t make music if I’m not dressed up and I have to be in costume,” she said. “I have to look sickening or else I can’t do it, which sucks in its own way, but it’s also just a lot of fun for me. It inspires me.”

The song, which is an objective bop, actually provided a mental break for her.

“For the last week or two before that, I was making songs back-to-back about more serious subjects, not politics, but love and sex and things like that. Kinda moodier music,” she said. “It’s kinda like my break from that was ‘Mooo,’ for sure.”

The Los Angeles-based singer, songwriter, and rapper added that something else inspired the viral hit: A superfan named squishycowfeet who often pops in when she goes live on Instagram to make impassioned defenses of cows.

“I don’t even know what squishy looks like, how old they are, where they’re from, anything,” she said. “I know nothing about them. Squishy would come and make jokes about how my culture is not your meme.”

Squishy, Doja said, inspired her to set the music video’s description to “My hide is not your prom dress,” in reference to the backlash Keziah Daum faced when she wore a traditional Chinese dress to her school’s prom earlier this year.

Still, she said that her outfit was her main focus.

And while she didn’t expect that a music video that she shot in her room using Photobooth turned into a viral sensation would take off, she’s not surprised.

Daughter of heroin addicts steals the show at Rose of Tralee

They said it was outdated as corsets, but anyone watching last night’s Rose of Tralee festival must have gasped at the question; “Tell me about the time you found out you were pregnant”. And so it was that platinum blonde Carlow Rose Shauna Ray Lacey, …

If you ever wanted to look like a sleeping bag, Moncler’s new fashion line has you covered 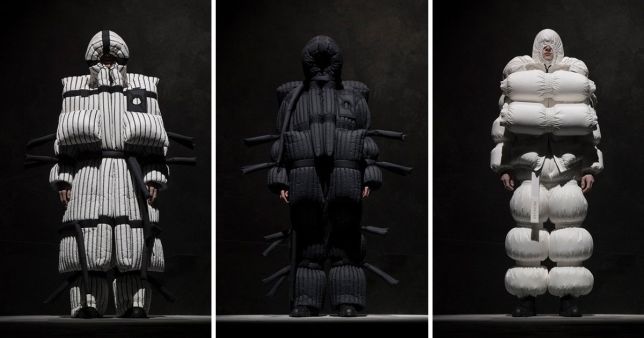 High fashion can be uppity – we don’t always get it. Sometimes, we really, really don’t get it. Italian apparel brand Moncler and British designer Craig Green are both well-known names in the world of fashion. Their collaboration, however, isn’t the biggest hit to grace the catwalk. The two brands have come together to launch a number of coats, vests, bags, and trousers for their new line, named Genius. However, the looks were anything but.

The Genius range comes in three different styles; pinstriped, black, and white. It’s packed with lightweight padded material, including matt nylon fabric and filled with cotton down. Obviously, you don’t want to look like a cold weather samurai without people knowing you’re wearing serious designer styles so don’t worry, the three-dimensional Moncler tag can’t be missed. A snazzy hood also covers most of your face, so at least people won’t spot you wearing the exaggerated outfit. People were left a little confused and naturally, they had a field day on social media about it. Most said the outfits looked more like a bedspread, an air mattress, and even the Michelin man (you know, the one with the rolls). In essence, people said it looked like a walking sleeping bag.

Though Moncler’s collaboration with Craig is set to launch on 22 August, people haven’t warmed to the idea. But it’s not the first time the British designer has been mocked for his sartorial creations.

Halloween is a time to dress up and have fun with your costume, but if you’re a curvy girl, finding one can be a struggle and a half. Whenever the time rolls around to find a costume, it’s so hard for me because I want …