Aquaman’s Comic-Accurate Costume Is A Spoiler 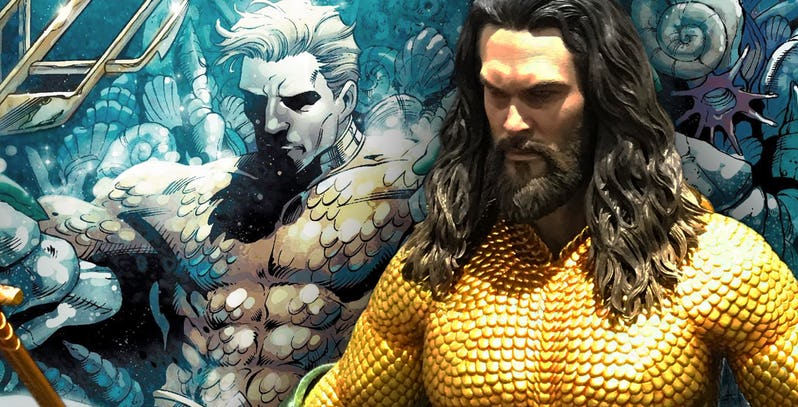 Aquaman’s comic accurate costume has been revealed by merchandise and Comic-Con exclusive footage – but is the orange-and-gold suit a spoiler for James Wan’s film? When Jason Momoa’s Arthur Curry was first unveiled for Batman v Superman: Dawn of Justice, it was a startling reinvention, with muted, tribal armor and a quindent instead of a trident.

However, over time it’s become apparent this isn’t Aquaman’s final form. Zack Snyder said as much, and gradually a look at the true Aquaman has emerged. At SDCC 2018, his classic gold-and-green costume (and accompanying trident) was sene in the flesh, and it was further teased in the Hall H sizzle reel. Now it’s emerging on more merchandise. Clearly, Warner Bros. are pushing this less grim-dark version of the reinvented King of Atlantis ahead of the film’s release.

But with the Aquaman trailer only showing Arthur Curry in normal getup and the plot of the movie about finding King Atlan’s trident, is it possible all this is a bit spoiler-y? This is established as classic Atlantean clothing by Atlan’s design, so surely Aquaman’s only going to don this in once he’s succeeded in taking his half-home. And, if it’s an endpoint, rather than a third-act suit up, then it surely gives away the ending status quo: Aquaman has got over his identity issues and accepted his watery home. That’s hardly surprising, sure, but it’s still confirmation of how things will resolve months ahead of time. Warner Bros. has a history of spoiling third-act developments in trailers: Batman v Superman: Dawn of Justice gave up Doomsday and with Justice League they couldn’t decide if Superman’s return was obvious are not. The DCEU has no examples as egregious as X-Men: Apocalypse revealing the final scene’s costumes or The Amazing Spider-Man 2 showing off the Sinister Six costume tease, but if Aquaman only gets his costume after finally beating Ocean Master, then this could be a grand example.

It certainly would make sense for WB to approach the film this way. This is their chance to make Aquaman an A-list superhero after decades of jokes about talking to fish. Snyder’s take overcorrected in the eyes of many by going too surfer bro, so this melding of Momoa in the comic suit is a perfect middle ground and what they want to lead with. It’s how they want audiences to view this new take going forward.

Conversely, though, it robs the first Aquaman movie of what could be a defining moment. Arthur ascending to the throne of Atlantis in the getup for the first time has the makings of a striking end to his hero’s journey, but if it’s all over the toys and trailers then it feels a little too overdone. Nobody’s not expecting Aquaman to claim the trident, so it’s not a damaging spoiler per se, but it could undercut some of what James Wan’s trying to do.